According to the Law on Healing Practices that came into force in October 2007 only medical graduates are allowed to legally practise homeopathy. But if medical doctors start practising ho- meopathy, the Slovenian Medical Chamber will suspend their medical licence. The Chamber takes the position that medical doctors with a licence can only practice scientific medicine and that homeopathy is not based on sound scientific evidence. Homeopathic doctors are then no longer allowed to practise conventional medicine.

The Executive Committees of LMHI and of ECH were present at the International Symposium for support, lectures and talks with high-ranking authorities. About 160 participants attended the bilingual conference, held in Slovenian and English, that was moderated by Dr. Milan Jazbec, Diplomat and Professor of Diplomacy at the Faculty of Social Sciences in Ljubljana. On the website of the Slovenian Homeopathic Society the video, photo album and presentations are available. 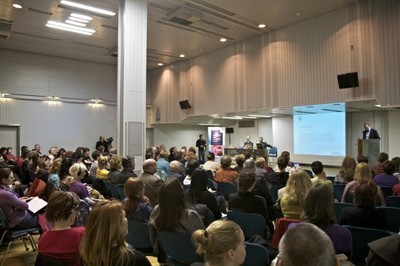 In the opening remarks, the Slovenian Human Rights Ombudsman Dr. Zdenka Cebašek-Travnik highlighted the ”Synergy between conventional and complementary medicine”. Both LMHI President Dr Ulrich Fischer and ECH President Dr Ton Nicolai gave presentations about the position of homeopathy in the world and in Europe.

The great success of the joint SHD-LMHI-ECH event was reflected in the positive media coverage: The conference gained national media interest from newspapers and magazines to TV and radio. On April 14, the Slovenian weekly Nedeljski dnevnik – with the largest printed edition and a readership of about 300 000 (population of Slovenia is around two million) – published a whole page report of the event titled Homeopathy: known for a long time, but not yet recognised. Press interviews with Dr Ulrich Fischer and Dr Ton Nicolai were published in the Slovenian newspaper Vecer.

Dr Ton Nicolai and Dr Ulrich Fischer had meetings with different key players in the health policy field. At the event itself with the President of the Committee on Health in the Parliament. After the event, together with Dr Irina Gorišek and Dr Katarina Velikonja from the Slovenian Homeopathic Society, they had official meetings with officials of the Ministry of Health, Slovenian Medical Association, Medical Faculty in Ljubljana, National Medical Ethical Committee and Academy of Science.