Conference to celebrate the 20th anniversary of the foundation of SIOMI, 15-17 March, Florence 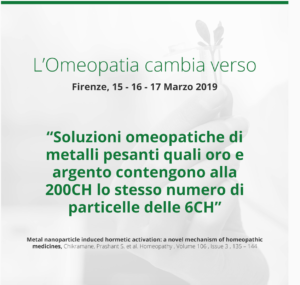 From the 15th to the 17th of March of this year, SIOMI organizes at its Grand Hotel Baglioni in Florence its VIII triennial conference entitled: “Homeopathy changes towards … The approach to chronic diseases, beyond the evidence”.

A deliberately ambivalent title: homeopathy changes, towards what?

Both solutions are true.

On the other hand, the cultural exchange and mutual respect of the two Medicines, the conventional one and the so-called “complementary” one, are inherent in the message of Integrated Medicine.

The Friday afternoon seminar will serve to focus on the hypothesis, dear to SIOMI, that puts the pharmacology of microdoses and hormesis at the base of the mechanism of action of homeopathic medicines, a theory somewhat opposed in the past by several homeopathic researchers, but that today is more and more appreciated.

Important international researchers in this sector will be talking about:

Edward Calabrese, from Massachusetts, the world’s leading expert on the hormesis,

Jayesh Bellare,from India,  the scholar who found molecules of active principle in all homeopathic dilutions, even the most extreme, corroborating the theory of pharmacology of microdoses.

The day will end the sociological vision of the “homeopathy phenomenon” offered by Luca Poma .

The seminar will be moderated by Andrea Dei , who isnpired much of the research dedicated to this working hypothesis.

There will also be a poster session on  clinical cases presented by SIOMI members and the toast to celebrate the twentieth anniversary of its foundation.